Churchill said Russia is “a riddle, wrapped in a mystery, inside an enigma.” That’s hardly more of a puzzle than American K-12, which is sophistries wrapped in lies inside a thick fog.

The problem in understanding K-12 is that you have a surface at odds with dark secrets inside. Imagine a beautiful $10 million mansion full of glamorous people leading expensive lives. Lots of good times. Life is perfect except that in the basement you have something deadly. Everyone gets sick from radioactive soil. Welcome to K-12.

John Dewey and his Socialists were intent on transforming public school students as the simplest way to reach the big goal: a socialist America. It’s important to remember that Dewey and his comrades never won an election; never explained what they were plotting; never asked for permission to rearrange the country. I'm sure Dewey was thinking the whole time: stand back, you deplorable people, this is for your own good.

Dewey and Co. concocted a bizarre army of pedagogical oddities. These were said to be modern, experimental, progressive. In fact, these dishonest theories and methods caused a great deal of misery for most of the country.

Sight-words don't teach children to read English. New Math and Reform Math keep many children from achieving even mediocre levels of math so they end up calculator-dependent. Constructivism is an inefficient way to teach almost any subject. And there are the usual suspects such as Prior Knowledge, Self-Esteem, Learning Styles, Relevance, Multiculturalism, et al. Progressive approaches are always described as breakthroughs but they are better called sophistries.

The bottom line: John Dewey chased his Socialist dream. The country ended up with 50,000,000 functional illiterates; high-school students who can’t multiply and divide; college graduates who can hardly find Australia on a globe. We have metastasizing ignorance and illiteracy.

Dewey’s K-12, far from bringing illumination, was an array of dark secrets that couldn’t be revealed because the public would not put up with them.

John Dewey's real goal was always indoctrination, brain-washing, psychological manipulations. The big central irony is that this so-called Father of American Education was more accurately hailed as the Father of American Socialism.

John Dewey made a lot of high-flown promises but what he was really doing was chipping away at the parts of the American character he didn't like. In particular, he hated individualism. Working well together was the one big virtue.

Now, that's the background of what happened in American education over the last century. Next step, knowing why the various gimmicks and sophistries never performed as promised.

Saving K-12 — What happened to our public schools? How do we fix them? is the quickest way to understand what went wrong in public education.

It's a blueprint for reform. Don't fight City Hall without it.

ERGO: Saving K-12 is a great gift for your smart friends. 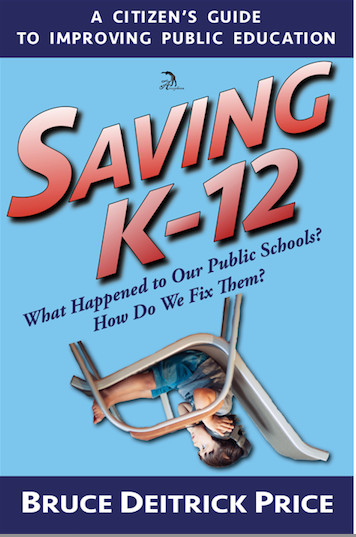