Should College Athletes be Allowed to Major in Their Sport? 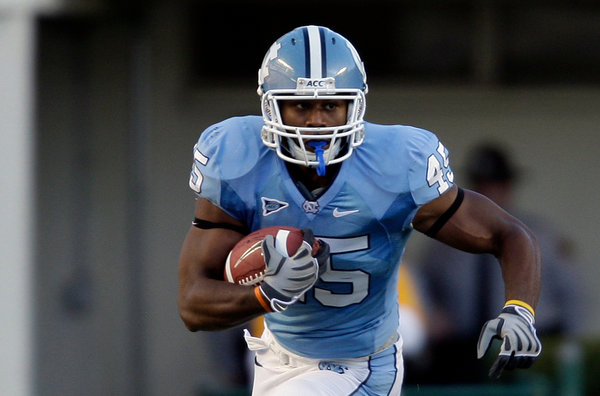 Devon Ramsay, a former player at the University of North Carolina, and Rashanda McCants, who played basketball, filed a lawsuit in January charging that the university and the N.C.A.A. had failed in their stated mission to educate them. CreditGerry Broome/Associated Press

The National Collegiate Athletic Association has long clung to the idea that college athletes are essentially engaged in extracurricular activities, but evidence to the contrary is mounting.

Football players might devote as many as 60 hours a week to their sport, with little time for studies. Graduation rates for Division I football and men’s basketball players hover around 50 percent, according to federal statistics. The University of North Carolina, Chapel Hill, has found that over the last two decades, some 3,000 students, about half of them athletes, took courses that sometimes did not meet or require any work. Two former players, Rashanda McCants and Devon Ramsay, filed a lawsuit in January claiming the university and N.C.A.A. failed to fulfill their stated missions of educating them.

Most college officials have focused reforms on sustaining academic standards and limiting sports participation. But to acknowledge reality — or what some consider the charade of college sports — others propose the opposite: more sports, as in offering varsity athletes academic credit, and perhaps a whole curriculum built around their sport, under the tutelage of learned coaches.

Proponents point to majors in other vocations like music and theater, where students pursue professional passions with little hope of performing on Broadway or in Carnegie Hall. Why is basketball or football so different?

After all, athletics, as the saying goes, is “the sweatiest of the liberal arts.”

Core arguments that support the creation of sports performance majors are put forward by two professors well versed in big-time sports, players’ academic shortcomings and the job market after graduation: David Pargman, a professor emeritus in educational psychology at Florida State University, and William D. Coplin, director of the public affairs program at Syracuse University and author of “10 Things Employers Want You to Learn in College.”

Dr. Pargman, who started a doctoral program in sports psychology at Florida State and has written several books on athletes, proposes a sample curriculum for a sports performance major that follows two years of basic studies, including anatomy and physiology, educational psychology and a particular sport’s offensive and defensive strategies. By graduation, players would have taken courses in public speaking, nutrition, kinesiology and business law. Practices become labs, supervised and graded by their coaches, though grades wouldn’t depend on game performance — no A for scoring a touchdown.

“Kids come to universities to play basketball and football professionally,” Dr. Pargman said. “Why don’t we legitimize that effort?”

Dr. Coplin, who has spent his career designing programs to serve students in the job market, believes the skills learned through sports — from highly specialized training to learning a complex playbook to simply being a good teammate— are more valuable to employers than classroom knowledge. Think of it as the three-man-weave-trumps-Lord Byron theory.

He envisions a three-credit seminar in conjunction with an “internship” — a semester on the team. The course could require players to keep logs of what they do each day and write a self-evaluation on career-building skills. “Athletes sometimes don’t realize the value of the skills they’re learning,” Dr. Coplin said. “But employers do.” He argues that their skill set — competitiveness, drive, the ability to work toward a common goal and take responsibility — is particularly valuable in sales and business management. Another idea for the class: an Excel lesson in which a player tracks his performance using trend lines and percentage change.

One supporter, Andy Geiger, a former Ohio State athletic director, recalled cajoling athletes to study simply to keep their grade-point average high enough to remain eligible to play. A degree in sports, he said, could close the enthusiasm gap.

“Think of the academic overlay,” added Karen Weaver, a sport management professor at Drexel University. “I’m training for a sport and I have to learn the science behind the muscles I’m using. I’m injured and I have to study and report on my rehab plan. It’s the ultimate personalized education.”

Such a hands-on education might also help players achieve what is, for many, their ultimate career goal: joining the professional ranks. Most won’t make it, but their fate, Dr. Pargman says, is not unique to sports: “Everyone who wants to be a doctor doesn’t get into medical school.”

With higher education already facing criticism that it is beholden to big-time sports, Josephine T. Potuto, a University of Nebraska law professor andN.C.A.A. faculty representative, worries that a sports major would be another example of the tail wagging the dog. “There comes a point when you are turning higher education into a pretzel to accommodate the high-revenue, fan attention-grabbing two sports,” she said.


A major sticking point is the illustrious history of academic fraud that long predates the University of North Carolina scandal. Dexter Manley, a former Oklahoma State defensive end, told a Senate committee in 1989 that he wasfunctionally illiterate during college. A smattering of universities used to offer courses entitled “Varsity Basketball” or “Varsity Football,” graded on attendance. Coach Bill Snyder of Kansas State — surprise — gave nearly all his players an A, and Jim Harrick Jr. was fired as assistant basketball coach of the University of Georgia; one of the reasons was a final exam he gave to his “Coaching Principles and Strategies of Basketball” class with multiple-choice questions like “How many points does a 3-point field goal account for?”

Currently, 20 colleges are being investigated by the N.C.A.A. on suspicion of academic fraud, according to a report last month in The Chronicle of Higher Education.

Given the billions of dollars pumping through the highest levels of college sports and the pressures to win, “football for credit could be ground zero for majoring in eligibility,” said Ramogi Huma, who as president of the College Athletes Players Association helped Northwestern foot-ball players file a successful petition to unionize last year.

Naysayers also note that if you want to make a career in sports, there are already ways to do it.

A perusal of West Virginia University’s academic handbook reveals a major in coaching education for those who hope to make it a profession. Nebraska offers a coaching minor. Alabama has a physical education degree tailored to players who plan to coach one day. There are exercise science, nutrition and kinesiology concentrations at schools across the country.


According to a Pittsburgh Post-Gazette analysis last year of the top 25 football and men’s basketball teams, players tend to cluster in fitness studies (other popular majors are gender studies, communications, interdisciplinary studies and sociology).

Mary Willingham, a former academic adviser at North Carolina, blew the whistle on the fraudulent classes there. Essentially, she said, Chapel Hill had been allowing athletes to major in sports because their academics had been a sham.

“Kids came out working at Target on the third shift or power washing houses,” she said. “A piece of paper that says ‘football degree’ wouldn’t change that. It’s not helping them get jobs.”


Ben Strauss covers sports from the Midwest for The Times and is writing a book about the N.C.A.A. with Joe Nocera.

A version of this article appears in print on February 8, 2015, on page ED4 of Education Life with the headline: Football Major, Basketball Minor?