I just wrote an article (I'm shamelessly proud of it) which points out that our public schools have a lot in common with Rube Goldberg contraptions. Bizarrely complicated and they don't achieve much. Seriously, this is funny.

As I was finishing the piece and checking over his bio, I found that Goldberg graduated with a degree in engineering and worked as an engineer. What could be more tedious and boring than studying to become an engineer in the waterworks department?

And I started thinking about Ken Robinson and all his glib nonsense about how we don't want to deprive children of their creativity. And under that banner, Robinson wants to deprive them of an education. That's how I see it. And here's why.

Who was the most creative American in the last hundred years? Rube Goldberg is certainly one of them. (You can read his bio and see his work at RubeGoldberg.com). Engineer Rube Goldberg.

If anything Robinson says makes sense, Goldberg wouldn't be so endlessly creative.

Personally, I think precision, hard work, discipline, learning Latin, and studying Greek philosophy are great ways to prepare for creative careers. In an article on my site titled "23: The Creativity Question," I similarly argued that James Joyce (shown) had an extremely repressive youth and education but became possibly the most creative writer of the 20th century. 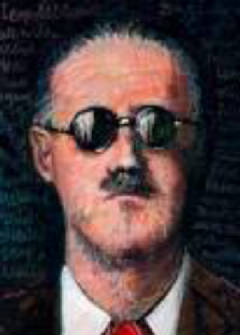