If only I had something nice to say about John Dewey

A lot of people think John Dewey invented the Dewey Decimal System. No, that was Melville Dewey.

John Dewey is America's premier educator. He is often called the Father of American Education. He was the guy, about a century ago, who started all the liberal/collectivist/progressive/experiential/socialist/cooperative stuff. 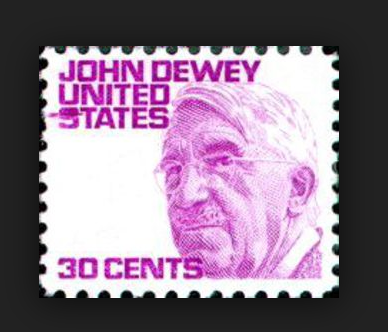 He wanted children to work together in an harmonious group. He didn't want anybody learning too much, because that would create social divisions in the classroom. And the whole point for Dewey was to have one homogeneous blob.

And right there you see why John Dewey took us off the tracks.

To hang onto homogeneity when humans are born in so many intellectual shapes and sizes, John Dewey had to resort to all kinds of tricks. Discourage literacy. Discourage knowledge. Discourage excellence...Now you see the problem.

All the things he wanted may have been good for socialism. But if you want smart independent people who can build and maintain a democracy, then Dewey is your worst nightmare.

A metaphor for explaining all this is to say that Dewey was in effect a hacker of our school system. He planted viruses and malware in the schools, i.e., ideas that he thought were quite wonderful but which work to undermine the primary purpose of the school. Almost everything wrong with our k-12 system you can trace to these viruses.

I would suggest that the secret to understanding Dewey's work is to understand that when he says "democratic," he means "socialistic." Fabian Socialists had been told not to use  this word. If you are in favor of socialism, then you will want to support Dewey. I, however, do not support him for two reasons. First, I'm not a socialist and, second, he is lying all the time. We have  epidemic dishonesty in education precisely because Dewey could never tell the truth about his plans.

Comment by Gary Swain on January 25, 2015 at 5:20pm
Obviously, someone who has never read Dewey and has no clear understanding of his democratic, pragmatic vision for society. Sad that a countrymen with such a hopeful message for America would be so wrongly dismissed. Nothing wrong to have some instructional concerns with dewey's emphasis on discovery-type methods but to poo-poo on his entire project is disconcerting to one who has dedicated much time to understanding his work.

Right you are!  It's time the politicians focused on fixing what is wrong in Washington that is affecting our National Security.  Why can't they present a balanced budget? Enforce immigration laws!  Repeal and Defund Obama Care that is killing jobs in America.  Welfare to work initiatives.  Maybe some of the life long benefits in "Government Service" that keeps career politicians serving themselves and not this country should be removed unless they meet the "standards"  2014-2015 focus on common core in Education may be just another distractor from what really needs to be worked on in Washington!