Doubts About High-Stakes Tests and Their Effect on Teachers

Doubts About High-Stakes Tests and Their Effect on Teachers 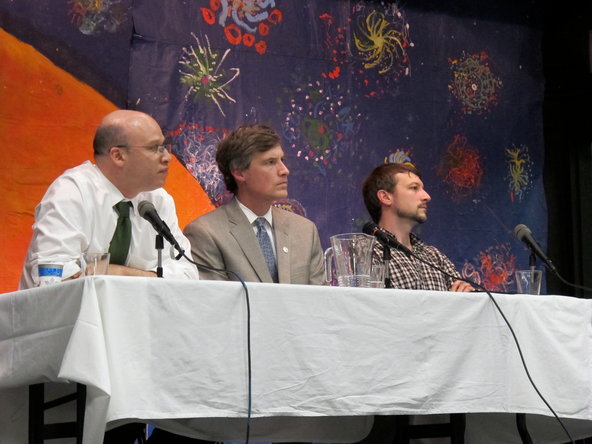 The chief academic officer of New York City’s public schools said on Monday night that principals were not alone in being concerned about the state’s new teacher evaluation system: He also has qualms.

At a panel discussion on high-stakes testing held at the Brooklyn Secondary School for Collaborative Studies, Shael Polakow-Suransky, the chief academic officer for the city’s Education Department, told a packed auditorium that the new law contained “real risks,” for teachers and principals alike.

Quietly passed into law by the State Legislature last week, the evaluation system calls for 60 percent of a teacher’s annual review to be based on subjective measures, like classroom observations and feedback from students. The remaining 40 percent is drawn from student achievement — 20 percent from growth on the state math and English exams, and 20 percent from assessments that districts can select and design.

Teachers who score below 65 points out of 100 will be rated ineffective, creating the potential for a principal to give a teacher a perfect score of 60 points on the subjective portion, only to have the teacher labeled ineffective if her score on the achievement portion is very low.

“A principal should not ever be in a situation where ultimately their judgment gets trumped by a mechanistic formula,” Mr. Polakow-Suransky said, adding that while he objected to such a scenario, he expected it to be a rare occurrence. “Ultimately there needs to be enough flexibility for the principal and the teacher to have a conversation about the work that’s happening” inside of the school, he said.

Sean Feeney, principal of the Wheatley School on Long Island and a co-author of a position paper opposing the new evaluation system, argued that the formula’s ability to override a principal’s opinion suggested “the lunacy of the system.” Mr. Feeney and other principals have called for lawmakers to eliminate the evaluation system’s use of students’ scores on the state math and English exams until after new, potentially improved assessments have been phased in years from now.

The panelists also debated the effects that the state standardized exams have had on schools, where they are administered every year to students in grades 3 to 8. While Mr. Feeney and Elijah Hawkes, the former principal of the James Baldwin Expeditionary Learning School, argued that the tests had narrowed the curriculum in schools across the state, Mr. Polakow-Suransky said that many schools had continued to offer students a full experience.

Parents and teachers in the audience — who applauded when Mr. Feeney called the state’s standardized tests “flawed” — said the effect of high-stakes testing was most apparent in schools in poor neighborhoods. One woman introduced herself as the mother of two children at Public School 8 in Brooklyn Heights, and a teacher at a school in Oceanhill-Brownsville. While her own children learn to be inquisitive and think critically, her students’ days are full of mind-numbing test prep.

“Every single day my students sit through two hours of testing to practice,” she said. “They are bored out of their minds; they are miserable; they are angry; they get in fights at recess. Yes, my students are learning; they are learning how to take tests.”

Mr. Polakow-Suransky said that while this constant practice had been a part of some schools for decades, it was not effective and would not produce the desired payoff in test scores the principal may be seeking.

“I should add that my school gets an A,” the teacher said, referring to the Education Department’s practice of giving A through F letter grades to public schools every year.

Dao Tran, whose daughter attends a school in the South Bronx, said that teachers were spending time instructing young children in how fill out bubble sheets; meanwhile, the school has no money for field trips.