Shame
from Curmudgucationby Peter Greene
The most shocking and disturbing thing that I saw on line this week had nothing to do with politics. It was a post by a teacher explaining her school's disciplinary system. As with many systems, students have a color-coded behavior level monitored and adjusted throughout the day. Unlike any school I'd ever heard of before, students at this school receive a colored card for their behavior level that they must wear on a lanyard around their neck all day.

When it comes to accounts of disciplinary systems in school, I try to tread lightly, because the context and human touch of implementation matter. But this is patently dumb.

What is it about human beings that makes so many of us believe in the magical power of shame. Shame inflictors tend to share a common narrative-- if we shame this person, that will motivate them to do better. Shame will push them to rise above their shameful failings, somehow.

This is bunk. It is not how human beings work. It is especially not how tiny humans work. 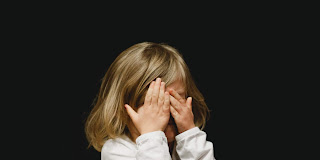 People do better because they feel strong enough to do better. When you shame someone, you tell them that they are weak, that they can't stand up, that they have fallen and failed because who they are is just not good enough. Adult humans with a strong sense of self have the power to beat that back, to say, "No, I know who I am, and it's not the person you're describing." But children-- young humans who don't yet have a clear sense of who they are? That's a different matter. That is part of what they come to school to find out-- what their best self is, and how that self can best be in the world. Telling them that some large part of them sucks is just wrong.

I know the impulse. Somebody has done something stupid or wrong or bad, and you are really really pissed about it, and what makes you even more pissed is that they don't seem to feel bad, not at all, not nearly as bad as you think they should feel. And so you launch on in there with shame missiles locked and loaded, determined that this person should feel as bad about what they've done as you think they should. For that moment, you set out to deliberately make another human being feel bad.

And it's not that shame doesn't have any place in human growth. God knows that I have done things in my life that I've felt ashamed of, felt the sting and weight of well-earned much-deserved shame, the kind of shame that all those homilies about shedding your "unearned guilt" can't touch. Figuring how to grow past that, how to embrace and heal the parts of you that did the thing-- it's one of those piece of personal education that isn't really worth the tuition (particularly the tuition that others pay).

But there's a big difference between feeling shame and inflicting shame. Feeling shame, when you've earned it, is a normal part of becoming more fully human. Inflicting shame is just emotional assault (and in the worst of human history, physical assault as well).

We've discussed lunch shaming at length, shaming students for being poor or, sometimes, for being thoughtless or disorganized or just not having their tiny human act together. It didn't help anybody.

We've just been through over a decade of education reformsterism that was built on the foundation of a magical belief in shame. We'll collect all these scores, and we'll publish them far and wide, and that will shame the bad teachers and the bad schools and the bad administrators and then they'll all want to shape up and do better. It didn't help anyone.

And, truth be told, with the exception of some small group of teacher saints, those of us who have stood in a classroom have at least once given in to the impulse to shame a student. And then we felt bad (shame, even) because it didn't help a bit. All it did was maybe convince the student to buckle a little more, and trust us a little less.

So if we give up shaming others, does that mean we let everyone run amuck? Of course not. Let me tell you a story about something that turned out to be a formative experience for me. In sixth grade, during music class, I sat in the back of the room, mocking Miss Gause the music teacher's directing style. I got called on it, and because it was the late 60s, I got paddled. Hard. What stayed with me was not the paddling; what stayed with me was that there was no belittling lecture about how awful I was, no complaining about how my character flaws, and, once the paddling was over, the incident never came up again, ever. I had screwed up, I had experienced a consequence, end of story. But how often do we make the mistake in a classroom-- we don't just want the student to experience consequences, but we want them to fell bad-- and visibly bad at that-- about what they've done.

I could also talk about Dr. Zolbrod, one of my college professors in the English department. The man had many gifts, but the one I always hoped I could somehow emulate was his ability to have me come in his office to talk about a mediocre paper I had written and send me out of there feeling like I could conquer the world (or at least write about conquering the world), despite my lousy grade.

You don't help people be better by shaming them. Yes, there are people who ought to feel shame who don't-- do you think you're going to force them into it? And there are other people who are feeling the full weight of shame, but are trying to keep things together so they can function in the world-- do they need an extra beat-down?

Shaming someone doesn't build character. It may reveal strength of character when someone stands up to shaming, but it's a lousy system for revealing strength, like tying peoples' legs together and tossing them into the deep end of a swimming pool.

And there's one other question to ask ourselves before we attempt to shame someone, to force them to  show us they feel bad, that they have the right attitude-- why do we think this person owes us a display of their personal emotions?

Shaming is a lousy basis for education policy-- at the federal level, the state level, the building level, and the classroom level. It's the tool of a bad manager.