Concussions and the Classroom By JAN HOFFMAN


Concussions and the Classroom 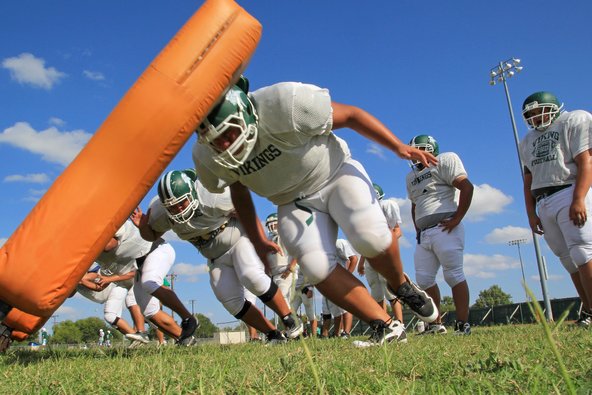 Because of heightened awareness about the hazards of sports-related concussions, many states have implemented standards determining when an injured student may resume playing contact sports. But only a few states have begun to address how and when a student should resume classwork.

On Sunday the American Academy of Pediatrics issued recommendations for “return to learn” checklists to alert doctors, school administrators and parents to potential cognitive and academic challenges to students who have suffered concussions.

“They’re student athletes, and we have to worry about the student part first,” said Dr. Mark E. Halstead, the lead author of “Returning to Learning Following a Concussion,” a clinical report in this week’s Pediatrics.

For adolescents prone to risk-taking behaviors, concussions are not just the nasty by-products of sports. Dr. Halstead, an assistant professor in pediatric sports medicine at Washington University, recently treated a 15-year-old girl whose concussion came not from a soccer match, but because “she was running backwards in a school hallway and cracked heads with someone.”

The academy emphasized that research about recovery protocols and cognitive function is scant: There is no established rest-until-recovered timeline. The new recommendations are based on expert opinions andguidelines developed by the Rocky Mountain Youth Sports Medicine In... in Denver.

Doctors generally recommend that a student with a concussion rest initially, to give the brain time to heal. That may mean no texting, video games, computer use, reading or television. But there’s a big question mark about the timing and duration of “cognitive rest.” Experts have not identified at what point mental exertion impedes healing, when it actually helps, and when too much rest prolongs recovery. Although many doctors are concerned that a hasty return to a full school day could be harmful, this theory has not yet been confirmed by research.

The student’s pediatrician, parents and teachers should communicate about the incident, the recommendations said, and be watchful for when academic tasks aggravate symptoms such as headaches, dizziness, sensitivity to light and difficulty concentrating. The academy acknowledged that case management must be highly individualized: “Each concussion is unique and may encompass a different constellation and severity of symptoms.”

Most students have a full recovery within three weeks, the article said. But if the recovery seems protracted, specialists should be consulted.

Many school officials do not realize they can make simple accommodations to ease the student’s transition back to the classroom, the academy said.

To alleviate a student’s headaches, for example, schedule rests in the school nurse’s office; for dizziness, allow extra time to get to class through crowded hallways; for light sensitivity, permit sunglasses to be worn indoors. Students accustomed to 45-minute classes might only be able to sit through 30 minutes at the outset, or attend school for a half-day.

“Parents need to follow up with schools and make sure plans are being followed,” Dr. Halstead said.

Dr. Robert C. Cantu, a clinical professor in neurosurgery at the Boston University School of Medicine and a co-author of “Concussions and Our Kids,” said, “The overriding theme is not to exacerbate symptoms.”

Dr. Matthew F. Grady, a pediatric sports medicine specialist at Children’s Hospital of Philadelphia who may see 50 patients with concussions a week during the fall sports season, often suggests that before students return to class, they should first try modest amounts of school work at home, to identify if and when symptoms recur.

“But that ramping-up period will depend on the severity of the concussion and the cognitive demands on the student,” he said.

Dr. Christopher C. Giza, a professor of neurology and neurosurgery at the David Geffen School of Medicine at the University of California, Los Angeles, cautioned against what he calls “cocoon therapy” — keeping a student sequestered excessively.

“Being a hyped-up, anxious parent doesn’t help the kids recover,” he said. ”Don’t ask them every hour, ‘Do you have a headache?’ That will cause them headaches.”

Annual reports of concussions suffered by young people are routinely considered low. Some researchers count only emergency room visits, though many families see private physicians or do not even seek medical care.

By one estimate, 300,000 high school and college athletes a year get concussions. However, neither middle-school athletes, nor students who play on travel or town recreation teams are included in that figure. Adolescents who suffer head injuries from reckless behavior, like falling out of trees, are also not represented in that figure.

Almost two years ago, when Jack Moseley was 16, he jumped on his longboard (a type of skateboard) to head down the street to a convenience store in northwest Philadelphia. He wasn’t wearing a helmet, nor was he bending his knees in a protective stance. Suddenly the board flew up and he fell back, cracking his head on asphalt.

Dr. Grady confirmed that Jack had suffered a concussion. For several days, Jack slept between 12 and 15 hours at a stretch. He had severe sensitivity to light and noise, migraine headaches and, as he put it, “my appetite was funky.”

He could only tolerate sitting in darkened rooms, not even able to watch the flickering lights of a television. “It’s like being a mushroom, which is hard for a kid,” remarked his father, Rick Moseley.

It took Jack nearly a month to recover. He exercised his brain in increments: 300-piece puzzles, then 10 minutes of homework, then 30. The greatest stressor, he recalled, was being aware of his limitations, even as he knew that rigorous schoolwork was piling up.

But in retrospect, Jack said, he is glad he took it slow. He has seen fellow students with concussions who returned to school right away. Their symptoms lingered far longer than his.

Now, he said, he feels academically strong and has not noticed any sustained effects of the concussion. Although he has yet to get back on a longboard, he has even resumed playing his favorite sport, soccer.

But, he added, “I avoid heading balls.”