Brainstorming: The 7 Dwarves’ Secret by Victoria A Davis

Brainstorming: The 7 Dwarves’ Secret
from Cool Cat Teacher Blog by Victoria A Davis

Design Thinking and Productivity that Matters

Walt Disney had 50 names for the seven dwarves. Why do so many of us think we need just one or two tries to have great ideas?Walt Disney understood that to become great, you ideate. Brainstorming was one key of his genius. 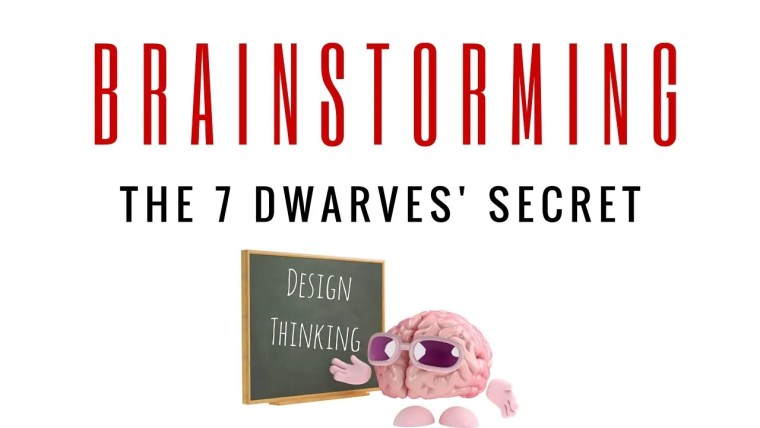 Among such odd names as “Graveful” and “Awful” and “Biggo-Eggo” – we find  “Grumpy,” “Happy,” and “Bashful.” Walt Disney didn’t stop with the first seven names he came up with. Disney had seven times seven plus 1.

Ideation is the “formation of ideas.” Geniuses have always ideated. Learn how to brainstorm if you want to be more creative.

In 1489, the same year he drew the Vitruvian Man, Leonardo Da Vinci made a list of all of the things he wanted to investigate about the human body. His list included such things as:

He made lists of questions and pursued the answers. Curiosity doesn’t kill the cat; it makes the imagination alive!

When Robert May was tasked to write a “cheery book to give store customers” for Montgomery Ward, he brainstormed a list of ten names for his reindeer. Could you imagine “Rollo the Red-Nosed Reindeer?” How about Reginald? Romeo? No, it became Rudolph.

But first Robert May came up with ideas. He ideated as he created.

Why Are We So Afraid of Idea Creation?

There are three reasons I think we don’t brainstorm more:

Let’s tackle these problems one by one.

Ideate and ruminate and then MAKE A DECISION.

Ideation is a process. We often call this brainstorming. Here are two easy ways to brainstorm.

Brainstorming Method A: Require 50 ideas. I wonder why so many people think they should be able to come up with the perfect idea in the second or third try? If Walt Disneybrainstormed 50 dwarves, can’t we?

I require 50 scribbled ideas for every brainstorm. The first ten will be trite, boring, and safe. When students run out of safe ideas, they get creative. And when they run out creative ideas, they become geniuses. When creating ideas becomes the goal, we get rid of inhibitions and come up with ideas. When we try to come up with a “good idea”, we stay safe. Safe is boring. Safe is unoriginal. Safe is never genius because safe has already been done before.

Brainstorming Method B: Freewriting. Mark Levy’s book  Accidental Genius gives insight into what happens when you have people free write about a topic for an amount of time:

Anyway, while they’re writing, be it for five minutes, thirty minutes, or something in between, I walk throughout the audience to check on how they’re doing. I offer encouragement and crack jokes. I never read what they’re writing. Nonetheless, I can tell the exact moment when the writing for them starts to click.

As I walk by, I jab my finger down on the page and say, “Here’s where you started saying something important” and “Here’s where your thinking came alive.” Almost always, the participants agree. They wonder how I could know.

My trick has a simple explanation: When they begin, participants tend to write in a cramped script that fits on the line neatly. Once they loosen up, once they tire, once their internal editor starts to recede and they viscerally connect with the material, their handwriting relaxes. It happens all of a sudden, and it’s easy to spot, even if they’re facing me and all I can see is their pads upside down. Their letters grow large and loopy, and they take up several lines. Their words grow fainter, because they stopped pressing on the paper so hard. It’s an unclenching of hand and brain. It’s the point where they stopped worrying about being correct and polite and began using the part of their mind that’s original and raw.

It takes time as Mark Levy says so beautifully for your brain to “unclench.” It isn’t easy, but when you see it happen you do it again and again. (There’s a reason this post started out over 2,000 words. It is now 1200 and I deleted the first original 800 of them!)

Teach students and teams how to ideate. Teach them methods of brainstorming. Help them unclench their brain and create ideas.

3. To Get to Great, You Must Be Willing to Risk Dumb

Why was Walt Disney completely unafraid to have a name like “Biggo-Eggo” as a potential name for a dwarf? Walt Disney was perhaps a genius, because he was unafraid of ideas – even crazy ones. There’s one small step from crazy to genius.

Few people remember the mockery Steve Jobs endured the day he unveiled the “iPad.”  Most people thought it was a dumb name.

But we don’t want to be the one people call silly. We stay mediocre, so we don’t get criticized instead of being the genius who stands alone.

If you fear to be wrong, you’ll never be right.

If you’re afraid of looking dumb, you’ll never be a genius.

If you won’t come up with ideas, you’ll never find novel solutions.

Make your team or classroom a safe place to come up with any kind of idea. Teach groups not to pass judgment too quickly. Help your group understand that “dumb” often precedes genius.

Let me ask you this:

Throw off the everyday clothing of the mild-mannered reporter and don your Superman cape, for goodness sakes. Tackle these questions with brainstorms. Freewrite. Ideate.

Create ideas — lots of them.

Talk about ideas — lots of them.

Yes, there’s a time to make a decision. But if you decide before you brainstorm, you’ve decided too soon. You’ve killed the conversation. You’ve buried genius.

So, don’t be Dopey! Refuse to let Grumpy or those who are Sneezy at new ideas keep you from coming up with them. It isn’t time to be Bashful or Sleepy. Listen to the Doc and come up with some great ideas! Lots of them! You’ll be Happy you did!

How do you teach brainstorming? Got tricks or ideas? Share them in the comments below or on your own blog. Let’s ideate together! Will you share your ideas?