Addressing the #bullying problem starts with adults by Lisa Nielsen 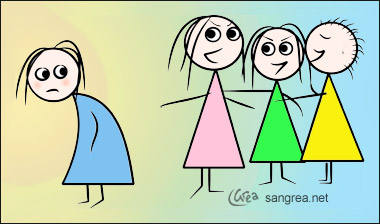 Editor's note:  October is National Bullying Prevention Month. It was created to raise awareness about bullying prevention. This post brings attention to a problem that we sometimes forget or are too uncomfortable to discuss. Bullying does not discriminate based on age.  If you know better, you can do better. Don't sit by and watch on, stand up and speak out when you notice someone is the target of bullying.
Educators and parents constantly discuss the nature of bullying. Despite the intensity of the focus on children, do we, as adults, focus adequately on our own social behavior?

I was recently the target of bullying.

While this behavior was upsetting, the reaction of those who were drawn into the situation was even more revealing. The bullying problem so prevalent in school years, often carries on into adult years with little thought given to it because, after all, these are adults. Adults however are the very people who often work with or have children. If adults can’t navigate right from wrong, is it any wonder that this is such a problem with youth today?

The story
I’ve organized women’s volleyball for many years. It’s how I stay in shape, and it’s a necessary relief from my demanding day job. Not long ago, a tall, athletic player (who also actively works with youth), about a decade younger than I, joined the group.

This player was frustrated when losing to a middle aged, 5’3 woman (me).  This frustration escalated to the point where having her against me on the court became a tension-filled, unpleasant experience for all present.

1. Admonishment
Bullying is generally defined as an attempt to coerce someone through intimidation that's not limited to physical force. One bullying tactic is to publicly chastise people. In this case, she did this by criticizing my style of play.

2. Providing Destructive Criticism
A bully will do their best to publicly undervalue your efforts in an attempt to seem big, and make the victim small.

What happened next
In textbook style, the bully picks a target; the one who most invokes her insecurity. The possible display of one’s own inferiority becomes intolerable. She uses her influence to sway those around her.

In Middle School, a child might organize public sentiment against another child. Secret clubs (online or off) might be formed for the purpose of excluding that person (rememberHarriet the Spy?). The situation escalates; other children don’t want to invoke the same behavior from the bully, so they go along; or they attempt to stay friends with both children and not make waves.

Is it a surprise that adults do it, too?

This player spoke to a few of the newer ladies or those on the fringe who were eager to feel included. She suggested they form a secret, underground group. I would be excluded.

Once the small core was established, they invited others to their secret group. They told new members it was an exclusive membership-only group for "skill-snobs" (as they called themselves) whose style/level of play was worthy of the person who orchestrated the plan. Members were told that no one else was to be added unless approved. Players were thrilled to be included!

The result
A successful result from bullying behavior is social exclusion for the target.

For many all-too-human reasons, these tactics tend to succeed. The success was guaranteed by those who are willing to ensure, through silence or fear, that the target is hit.

In addition to exclusion there was...

Isolation
I was going along, posting as usual to organize games, but I was being ignored. People were not responding and instead were organizing on this new, secret group. I was in the dark.

Additionally social activities were being planned that excluded me. In an age of social media I was privy to these events via public photos to which I had not been invited.

The reveal
I was made aware of what was going on by a friend who fessed up. She admitted she felt manipulated into this situation. The bully had left town and now people were free to include who they want and play with who they want.  She and others explained they were relieved.

The response
When I learned that it was exclusion by design, I could not ignore it. I reached out to those I considered friends. I was curious how so many people had let this happen. Some deflected blame, plead ignorance, or seemed annoyed that I was addressing what happened. I was impressed by the reactions of a mere few which were more encouraging. Some apologized for not standing up, others expressed regret about what happened and for their known, or, in some cases, unknown, compliance.

My reaction
I try to treat others with dignity and respect. I'm sure many people consider that they do the same.  But what troubles me is that people are not so blind; they are not so clueless. They decided not to speak up, but to stand by as long as their world was not interrupted. Even now, the bully was not, and likely will not be, confronted. Although it has not truly been dealt with people are eager to, "Put this behind us, rather than address it."

This is not what we want for our children and it certainly should not be the way we behave as adults.

It took one bully a very short time to involve the group in a classic case of bullying. She came, she did her thing, and she left, and in all that time, no one confronted her or informed me what was taking place.

Here’s the thing: when you go along with bullying behavior--even if you didn’t start it--you are complicit in that behavior.  As adults we can and should know better and do better.

Now what?
I am an educator at heart. I believe in the ability of people to change and grow. A few people stood up to the behavior, but not enough.

My reaction to the situation had the advantage of adult years and experience. How would it have felt if I was eleven?

It is critical that we examine and change our behavior not just because it is the right thing to do, but also for the sake of those younger people who observe it.

Too many adults cavalierly follow the leadership of a bully. Is this merely human nature, and therefore inevitable? Or should we expect more from ourselves, and own up to the greater task of modeling cooperation and healthy interactions for our children?