A Genetic Code for Genius? By GAUTAM NAIK

A Genetic Code for Genius?

In China, a research project aims to find the roots of intelligence in our DNA; searching for the supersmart


At a former paper-printing factory in Hong Kong, a 20-year-old wunderkind named Zhao Bowen has embarked on a challenging and potentially controversial quest: uncovering the genetics of intelligence. 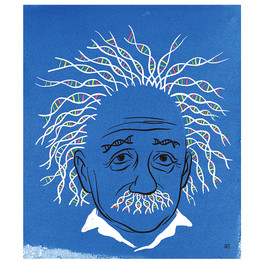 Studies show that at least half of the variation in intelligence quotient, or IQ, is inherited.


Mr. Zhao is a high-school dropout who has been described as China's Bill Gates. He oversees the cognitive genomics lab at BGI, a private company that is partly funded by the Chinese government.


At the Hong Kong facility, more than 100 powerful gene-sequencing machines are deciphering about 2,200 DNA samples, reading off their 3.2 billion chemical base pairs one letter at a time. These are no ordinary DNA samples. Most come from some of America's brightest people—extreme outliers in the intelligence sweepstakes.


The majority of the DNA samples come from people with IQs of 160 or higher. By comparison, average IQ in any population is set at 100. The average Nobel laureate registers at around 145. Only one in every 30,000 people is as smart as most of the participants in the Hong Kong project—and finding them was a quest of its own.


"People have chosen to ignore the genetics of intelligence for a long time," said Mr. Zhao, who hopes to publish his team's initial findings this summer. "People believe it's a controversial topic, especially in the West. That's not the case in China," where IQ studies are regarded more as a scientific challenge and therefore are easier to fund.


The roots of intelligence are a mystery. Studies show that at least half of the variation in intelligence quotient, or IQ, is inherited. But while scientists have identified some genes that can significantly lower IQ—in people afflicted with mental retardation, for example—truly important genes that affect normal IQ variation have yet to be pinned down.


The Hong Kong researchers hope to crack the problem by comparing the genomes of super-high-IQ individuals with the genomes of people drawn from the general population. By studying the variation in the two groups, they hope to isolate some of the hereditary factors behind IQ.


Their conclusions could lay the groundwork for a genetic test to predict a person's inherited cognitive ability. Such a tool could be useful, but it also might be divisive.


"If you can identify kids who are going to have trouble learning, you can intervene" early on in their lives, through special schooling or other programs, says Robert Plomin, a professor of behavioral genetics at King's College, London, who is involved in the BGI project.


But critics worry that genetic data related to IQ could easily be misconstrued—or misused. Research into the science of intelligence has been used in the past "to target particular racial groups or individuals and delegitimize them," said Jeremy Gruber, president of the Council for Responsible Genetics, a watchdog group based in Cambridge, Mass. "I'd be very concerned that the reductionist and deterministic trends that still are very much present in the world of genetics would come to the fore in a project like this."


Mr. Zhao is a phenomenon in his own right. In addition to his genetics wizardry, he says his near-fluent English is self-taught. His career as a geneticist began quite humbly—with the cucumber. In 2007, he skipped afternoon classes at his school in Beijing and started an internship at the Chinese Academy of Agricultural Sciences.


He cleaned test tubes and did other simple jobs. In return, the graduate students let him borrow genetics textbooks and participate in experiments, including the sequencing of the cucumber genome. Mr. Zhao was 15 years old; when the study of the cucumber genome was published in Nature Genetics in 2009, he was listed as a co-author.


Tantalized by genomics, Mr. Zhao quit school and began to work full-time at BGI, one of the biggest genomics research centers in the world. It is based in the mainland city of Shenzhen, near Hong Kong. The following year, BGI founded a cognitive genomics unit and named Mr. Zhao as its director.


Mr. Zhao's first foray into the genetics of intelligence was a plan to collect DNA from high-achieving kids at local high schools. It didn't work.


"Parents were afraid [of giving consent] because their children's blood would be taken," says Mr. Zhao. Blood samples are the most efficient way to collect DNA samples.


In the spring of 2010, a theoretical physicist called Stephen Hsu from the University of Oregon visited BGI. Dr. Hsu was also interested in the genetics of cognitive ability, so the pair joined with other colleagues to launch the BGI intelligence project.


One part of the plan called for shifting to saliva-based DNA samples obtained from mathematically gifted people, including Chinese who had participated in mathematics or science Olympiad training camps.


Another involved the collection of DNA samples from high-IQ individuals from the U.S. and other countries, including those with extremely high SAT scores, and those with a doctorate in physics or math from an elite university. In addition, anyone could enroll via BGI's website if they met the criteria.


The Shenzhen government agreed to pay for half the project, and BGI said it would pitch in the other half, says Mr. Zhao.

IQ of high-intelligence individuals in the BGI study


Most of the samples so far have come from outside of China. The main source is Dr. Plomin of King's College, who for his own research had collected DNA samples from about 1,600 individuals whose IQs were off the charts. Those samples were obtained through a U.S. project known as the Study of Mathematically Precocious Youth, now in its fourth decade.


Dr. Plomin tracked down 1,600 adults who had enrolled as kids in the U.S. project, now based at Vanderbilt University. Their DNA contributions make up the bulk of the BGI samples.


Dr. Hsu embarked on his own marketing drive. When giving science talks at various institutions, including the California Institute of Technology, Taiwan's Academy of Science and Google, he exhorted listeners to sign up for the study.


BGI's website has so far attracted about 500 qualifying volunteers.


The scientific challenge is significant. Consider the genetics of height, which, like intelligence, is a complex trait governed by many different genes, each one with a tiny influence.


Attempts to find height-related genes didn't yield any reliable hits until the number of DNA samples exceeded 10,000. By studying more and more samples, scientists have now identified about 1,000 genetic variations that partly explain why some people are taller than others. Those results are replicable—and they hold true whether a person is from Iceland or Japan.


By comparison, one of the biggest genomic investigations of IQ attempted so far involves only about 5,000 people drawn from the general population. Scientist say that tens of thousands of regular people would have to be studied just to find the first useful IQ gene.


That's where BGI's genomic deep dive comes in. The team will compare the genomes of 2,200 high-IQ individuals with the genomes of several thousand people drawn randomly from the general population. Because most of the supersmart participants being studied are the cognitive equivalent of people "who are 6-foot-9-inches tall," says Dr. Hsu, it should be much easier to identify many key IQ-related factors in their genomes. (Dr. Hsu is now vice president for research and graduate studies at Michigan State University.)


"The genetic basis of intelligence has been ignored for a very long time," says Mr. Zhao. "Our data will be ready in three months' time."

A version of this article appeared February 16, 2013, on page C3 in the U.S. edition of The Wall Street Journal, with the headline: A Genetic Code for Genius?.