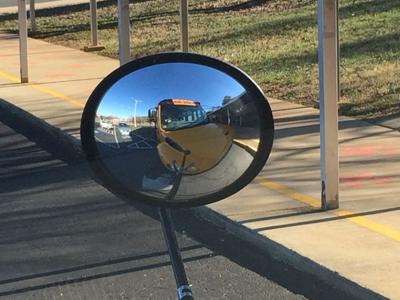 If the Orange County Public Schools purchase a GPS system for the buses, parents will be able to track when their children's buses are due to arrive within a span of a few minutes.

There’s an app for just about everything, and by the beginning of the next school year, the Orange County Public Schools (OCPS) may have one allowing parents to track the arrival of their children’s school buses.

In a recent school board meeting, Superintendent of Schools Dr. Cecil Snead included a “GPS client-friendly transportation package” in his list of funding priorities for the next school budget.

Parents with the app on their phone or registered on a personal computer would be able to track their child’s bus in relation to their home bus stop and know when the bus was “three or four or five minutes away,” according to Justin Sarver, transportation supervisor for Orange County schools.

And if a bus broke down, Sarver said, the system would send a message to the parents of the children on board. It would “let them know immediately and give them a revised drop-off time.”

He stressed that parents and guardians without smart phones or computers would not be left out. The current alert system would continue to send automated phone messages to them.

The proposed system would cost around $40,000 to $50,000 per year, Sarver said. “It has a cellular connection. There are some hardware costs as well.”

The proposed system also would allow the school division to know which children are on a bus. Students would scan a school ID card as they boarded, and that information would generate a roster.

Sarver said his office receives frequent calls from parents trying to figure out where their children are. Due to custody arrangements and various child care providers, many children travel several different routes over the course of a typical week, and some stay after school for an activity and take a later bus home.

The new system would help keep tabs on students, including those who decide on the spur of the moment to go home with a friend. If someone boarded the wrong bus, Sarver said there are a couple of different options: an “error” message might flash on the bus or, if parents inquired, Sarver’s office could inform them which bus their child was riding.

He said several vendors provide the service, but OCPS has not yet sought quotes from them. Some funding for the system may be available from private grants, he added.

Sarver’s office already has a computer tracking system that allows him and his staff to see where buses are, but he said the proposed system would be more precise—plus, it would give parents direct access to the mapping system as their child’s bus approaches the stop closest to home. The system does not give registered users access to the whole route.

“It’s an additional option for parents interested in having the extra peace of mind to more closely track where their child is located during transport,” Sarver said.

He told the school board that there have been some stressful times when children initially appeared to be missing: “We’ve gone as far as having law enforcement searching through neighborhoods” looking for a child who didn’t arrive home as expected.

If Orange County purchases the system, it would join neighboring counties that have made the leap into GPS bus-tracking. Sarver said Albemarle, Culpeper, Louisa, Spotsylvania and Stafford already have the system in place.

For some parents, especially those who have moved to Orange County from larger localities, bus-tracking is “almost an expectation,” he noted. He said he has heard from parents in Locust Grove in particular.

Beyond the basic functions, the system could be configured so that it would record a bus driver’s “time and attendance.”

There are 100 buses in the OCPS fleet, and the oldest is 16 years old.

Bus breakdowns occur about once a week, Sarver noted, though the new lease-purchased buses are “running beautifully” and have had no major problems.