How to handle test opt-out requests

By the New York State Association of School Attorneys

School districts in New York are likely to face increasing numbers of requests from parents that children be allowed to “opt-out” of state standard- ized tests. However, neither the law nor commissioner’s regulations provide any legal right or mechanism for students – or districts – to opt-out of required state assessments. Moreover, the state’s accountability system requires districts to have a 95 percent participation rate in these assessments.

What should districts do when they receive an opt-out request? How should a student’s refusal to participate in a state-required examination or absence on test day be handled? This article discusses the requirements of both federal law and the State Education De- partment (SED), and outlines options for districts.

Across the nation, grassroots groups opposed to standardized testing have become politically organized in the past couple of years. This month, for the second year in a row, various groups and opt-out promoters protested at the U.S. Department of Education. The event, called “Occupy DOE 2.0: The Battle for Public Schools,” was held from April 4-7 in Washington, D.C. Speakers encouraged parents to contact school districts and request that their children be exempted from state tests.

On websites, blogs and social network forums, many groups have provided template letters and re- sources for parents to use in drafting such requests.

No Child Left Behind requirements

State governments’ testing programs are required by the federal No Child Left Behind Act (NCLB), a federal law that is expired but still in force. NCLB requires states to administer tests in English Language Arts (ELA) and mathematics in grades 3-8 and at least once in grades 10-12. It also requires states to administer testing in science at least once during grades 3-5, 6-9 and 10-12.

Although some states have statutory opt-out provisions, New York does not. Nor is opting out permitted under state commissioner’s regulations except under specific exceptions, such as those involving students with disabilities.

Steven E. Katz, SED’s director of the Office of State Assessment, addressed opting out of state tests in a six- paragraph memorandum he sent to superintendents in January 2013.

With the exception of certain areas in which parental consent is required, such as Committee on Special Education (CSE) evaluations for students with disabilities and certain federally-funded surveys and analyses specified under the federal Protection of Pupil Rights Amendment (see 20 U.S.C. §1232h), there is no provision in statute or regulation allowing parents to opt their children out of state tests.
Katz also said: “All schools that administer state operational tests are also required to administer the field tests associated with them.”

Despite this memo, some anti-testing advocates still contend parents have a right to have students “refuse” to take a given test. In fact, one parent’s blog cited a response from SED that the parent received after seeking clarification about the memo. The blog reported that an SED official said districts “are required to place a test in front of all students who are present during the administration or make-up period.” In addition, SED explained that “[s]tudents who refuse to take any or all portions of these assessments are coded as ‘999,’ or ‘not tested.’ This code is not to be used as an opt-out option for parents.”
While the response contemplates the possibility of a student refusing to take a test, it does not indicate this is lawful or permissible. However, anti-testing advocates and parents may interpret SED’s statements differently.

Consequences for refusals and options for school districts

Contrary to the claims of some anti-testing advocates, there are potential consequences for students and districts when students fail to participate in state testing. First, in accordance with NCLB, New York State requires each district to have participation of at least 95 percent of a school as well as subgroups of students that are evaluated in the state’s accountability system. If a district does not reach this level of participation, it will not make “Adequate Yearly Progress” (AYP), and a district’s Title I funding will be affected. In addition, there may be intervention consequences for districts that fail to meet AYP.

Furthermore, districts’ policies and procedures for determining enrollment and promotion may be triggered. For example, a district’s procedures for promotion to the next grade may be based on a student’s level of achievement on a state assessment. In addition, districts may make determinations for enrollment into honors courses/programs or gifted and talented programs based on students’ performances on state assessments.

Given the potential consequences, districts may want to consider the following regarding the opt-out movement:

• Educate the community. An article in the district newsletter or posting on the district’s website, Facebook page or Twitter feed prior to tests can clarify the district’s position and encourage universal participation in state tests. The article should note that districts have no authority to allow students to opt-out of state testing and that the district’s access to federal Title I money and accountability status would be threatened by participation below 95 percent.

• Meet with parents individually. If a request is received, district officials may want to consider meeting with each parent one-on-one to explain the district’s responsibilities to administer state assessments. Face-to- face interactions provide for dialogue and are more conducive to good relations than a form letter response.

• Examine attendance policies. While some parents may seek to opt-out students, others may simply keep them home on test days. Districts should consider reviewing their attendance policies and revising their policies to address such absences. If a student is absent, the student may be required to make up the test depend- ing on the specific state assessment involved. In addition, districts may want to consider what, if any, consequences to implement if a student has an unexcused absence on a state assessment day. For instance, districts could prohibit students with such unexcused absences from participating in extracurricular clubs, athletics, or other school sponsored functions (i.e., school dances, activity nights). However, districts should en- force such policies uniformly and give adequate notice on any changes.

• Provide make-up testing. Districts should care- fully review guidance from SED regarding make-up test- ing. Not all state assessments can be made up and districts may want to address any individual questions on make-up testing with SED.

• Examine your student handbook. Districts may want to review academic guidance documents to ensure students are aware that participation in state exams is required and the potential impact of nonparticipation on grades, promotion and enrollment.

Given the minimal guidance offered by SED on parental opt-out requests, districts should be prepared to analyze each request a on a case-by-case basis. Consult your school attorney regarding this relatively new and developing issue.

This article was written by Melanie J. Beardsley and Andrew J. Freedman of the Buffalo office of Hodgson Russ, LLP.

Permalink Reply by Betsy Salemson on April 14, 2013 at 9:51am
It is despicable that student performance on state tests has any role at all in teachers' evaluations. This is bad enough when it is a specific regents exam that targets specific information from a course, but when the teachers are evaluated by students' successes or failures on a general standardized test, everybody loses. If this is where we are and what we are becoming we should fear for our future. This is the road to fascism.

Good information for school districts, although it's still disheartening to not only see all these new mandates sprouting up, but teachers' evaluations being tied to them as well. During a #satchat on Twitter a few weeks, a relevant tweet by @gunnellAP resonated with me:

" What if we judged doctors primarily based on the survival rate of their patients, who then would work with the terminally ill? #satchat " 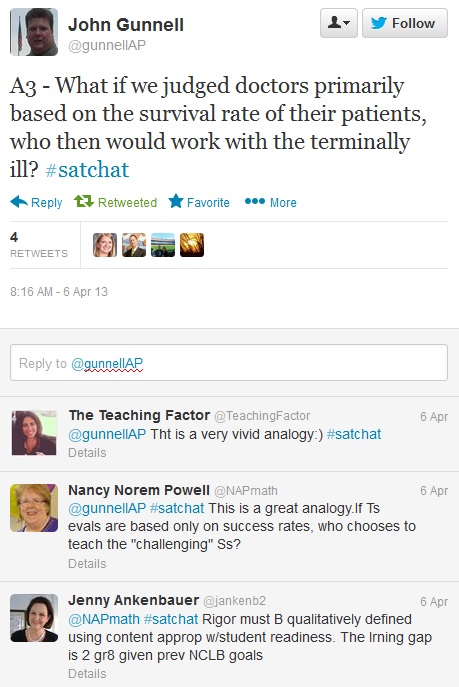 It is worthy to note that most opt-out organizations are facilitating learning on test days by creating lists of schools who will accept students who are opting out, for those days in which testing is going on. It is now apparent that many students opting out of testing are doing so, so that they can receive an education on those days versus being measured by standardized tests. It is also interesting to note that to date there are now 850 colleges/universities across the U.S. which require no ACT/SAT test; it appears our post-secondary brethren are increasingly critical of the claim that standardized test scores correlate with academic success in students' post-secondary endeavors.