History teaches us that keeping children at home early in an outbreak can save lives. 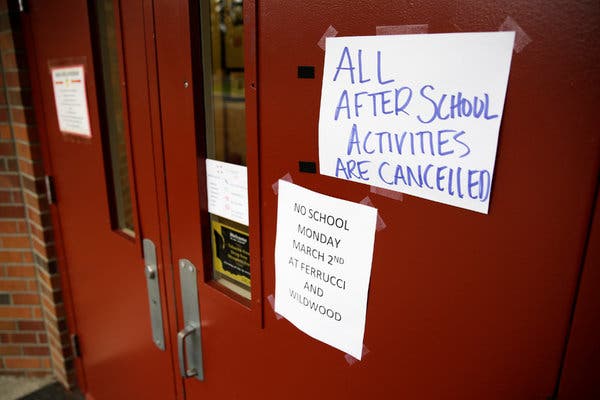 Signs at Ferrucci Junior High School in Puyallup, Washington where two schools were closed earlier this week due to coronavirus concerns.Credit...Jason Redmond/Reuters

[This article is part of the developing coronavirus coverage, and may be outdated. Go here for the latest on the coronavirus.]

My research on the long history of epidemics has taught me that when it comes to outbreaks of contagious respiratory infections, closing schools can help prevent many thousands of illnesses and deaths.

Schools are community gathering places where large numbers of people are in proximity to one another and respiratory infections can easily spread among young people and adults alike. Shutting them down can be a key part of slowing the spread of easily transmissible viruses so that hospitals are not overrun with sick people, and it can help to buy time to allow for the development of antiviral medications, medical treatments or a vaccine.

But policymakers working to stop the spread of the coronavirus that causes Covid-19 should remember a key part of this historically informed equation: We can’t wait until it’s too late.

Communities in the United States must shut down schools before, not after, the outbreak becomes widespread here. “Widespread” is admittedly an imprecise term, but I use it to describe a situation in which there are multiple cases throughout a town or state and more cases with each passing day.

In 2007, my colleagues and I at the University of Michigan Center for the History of Medicine and the U.S. Centers for Disease Control and Prevention studied the 1918-19 influenza pandemic, which killed up to 750,000 Americans.

We looked at 43 large cities that carried out some combination of non-pharmaceutical interventions (NPIs): isolating the ill or those suspected of being ill in hospitals or at home; banning public gatherings; in some cases, shutting down roads and railways; and closing schools.

School closing turned out to be one of the most effective firewalls against the spread of the pandemic; cities that acted fast, for lengthy periods, and included school closing and at least one other NPI in their responses saw the lowest death rates.

Of course, all NPIs are socially disruptive and should be used only as a last resort, to control infections that are highly transmissible and dangerous, and have high fatality rates. The primary problem with the new coronavirus is that we have never before experienced an outbreak with it, so we do not yet have good, stable numbers to tell us how serious it is.


Based upon the assumption “that the number of asymptomatic or minimally symptomatic cases is several times as high as the number of reported cases,” experts at the National Institute of Allergy and Infectious Diseases are predicting that Covid-19’s case fatality rate may be considerably less than 1 percent. While that is higher than the rate for seasonal flu (0.1 percent), it’s much lower than the staggering rate we saw in the 1918 influenza pandemic (2.5 percent in the United States, and in some nations higher). It may even fall lower once we have a better sense of the number of mild cases. If this happens and most cases of Covid-19 turn out to be no worse than a nasty but not deadly bout of flu, NPIs like school closings won’t be necessary.

But this kind of data might not be available for analysis until Covid-19 has already spread widely. So for now, policies to contain it should be influenced by the adage “better safe than sorry.” There’s no room for the public to grouse about calls made too early.

After all, it’s easy to reopen schools if the news is good. For example, my colleagues and I observed the use of school closings and other NPIs during the 2009 H1N1 influenza epidemic. During the first days of the outbreak in Mexico, the Health Ministry conducted a broad-based and exacting group of NPIs, similar to the ones we found worked in 1918. The measures appeared to contain the spread of influenza but were revoked 18 days later after it became clear that the H1N1 influenza virus was widespread but not all that deadly.

On the other hand, we studied the use of 559 school closings in Michigan during the fall wave of the 2009 H1N1 influenza epidemic. Eighty-three percent of those closings occurred long after the virus had reached its peak week of infection and had already spread widely among people living in those school districts. The results were all too predictable: The late, reactive school closings had little effect on levels of influenza-like illnesses.

There’s no reason to close schools in communities that have not yet seen Covid-19. But that situation could change quickly, and when it does, school officials, public health agencies and municipal leaders will need to be ready to make the tough call of shutting the schools down. School officials should be checking C.D.C. guidance daily, if not hourly.

In another study, my colleagues and I looked at the spring wave of the 2009 H1N1 influenza epidemic across the United States and found that because of confusion over the advice given by the C.D.C., many school districts closed too late or did not close at all. And of course, when the flu came to these towns, it did what an influenza virus always does: It spread. Good, frequent communication among decision makers will be crucial to avoiding this kind of mishap.

In the meantime, employers ought to develop policies allowing parents to stay at home with their children and not be penalized.

Again, there’s no agreed-upon scenario that determines exactly when to make the school-closing call. But if there is an outbreak of several cases of the coronavirus among, say, a class of third graders in one elementary school, an immediate school closing —  including the schools of those third graders’ siblings and other kids with whom they’ve had contact — would be a good idea.

Some schools have already shut down. A district near Seattle canceled classes after a parent volunteer tested positive for Covid-19. A school in White Plains, N.Y., did the same after three children enrolled there tested positive. These were rational choices that seem to have been accepted by parents.

To be sure, more than 80 percent of the Covid-19 cases reported so far have been mild, and few children have been among the people suffering from serious or deadly cases. But most parents would tolerate the inconvenience of school closings if it meant they were avoiding even a relatively small risk to their child’s health. Just as important, children of all ages are especially good at spreading respiratory viruses, which puts adults who work in schools as well as health workers in emergency rooms and hospitals at risk if schools remain open. Keeping kids at home could be an important part of saving lives.

In the history of medicine, we have never been more prepared to confront this virus than we are today. But this history also teaches us that when it comes to school closings, we must always be ready to act today — not tomorrow.

Dr. Markel is the director of the Center for the History of Medicine at the University of Michigan and a professor of pediatrics.

The Times is committed to publishing a diversity of letters to the editor. We’d like to hear what you think about this or any of our articles. Here are some tips. And here’s our email: letters@nytimes.com.

A version of this article appears in print on March 9, 2020, Section A, Page 21 of the New York edition with the headline: Be Ready To Cancel Classes. Order Reprints | Today’s Paper | Subscribe