If You Could Build Any School, What Would You Build? by Aylon Samouha

If You Could Build Any School, What Would You Build?

Success for ALL Students: Can You Answer These 10 Questions?

Attention to the success of ALL students focuses on curriculum and standards, differentiation and intervention, assessment and evaluation. All of that stands on the shoulders of the social emotional health of each child and adult. Whether we can take full responsibility for social emotional health of our students, and the people who work in our organizations or not, we must pursue it in earnest.  No one, child or adult, can bring their best selves to any task, if…

Educating students in poverty requires more time than is provided in the traditional school calendar, writes Jennifer Davis of the National Center on Time and Learning in The Hechinger Report. To address socioeconomic disparity, all the research indicates schools must offer more and better in-school learning and enrichment. High-needs students both require and want additional opportunities and supports to flourish. Expanded-time schools…

A better vehicle for reformist passions

K-12 education reform is an "exhausted, blood-soaked battlefield," writes Nicholas Kristof in The New York Times. Yet something everyone can agree on, and surely a better place to channel reformist passions, is early childhood education. Abundant evidence shows that education early in life can break the poverty cycle. Interventions typically produce cognitive gains that last at least a few years, and produce better life outcomes…

For many high school seniors, spring means high school is over and it's okay to check out, writes Andrew Rotherham for U.S. News & World Report. At the other end of the educational path, many parents struggle to afford high-quality preschool for their four-year-olds. Rotherham's solution: Why not abolish senior year, and use that money for universal access to pre-K? High-quality pre-K programs would cost tens of billions…

Are Our Schools Safe Places for Kids who are Different? Posted by Bill Ferriter

Are Our Schools Safe Places for Kids who are Different?

BUFFALO, N.Y. (AP) — Buffalo's chronically struggling school system is considering an idea gaining momentum in other cities: public boarding schools that put round-the-clock attention on students and away from such daunting problems as poverty, troubled homes and…

Serial: A Free and Personal Professional Learning Experience in Objectivity

How can an open mind and an open heart be maintained in the heavily contentious environments educators find themselves in these days? Professional development can happen in a variety of forms.  It can come in structured learning from a instructor, reading a book, participating in a professional learning community or from witnessing an exemplar of a behavior and making a personal choice to employ that behavior or develop that skill. Here, we are writing about the…

It has probably happened to EVERYONE in education. They have read a memo from on-high, they have observed a classroom practice, they have overheard a conversation, they have been lectured to by their principal or superintendent, they have read something in the newspaper.... and a huge red flag unfurled, buzzers  began sounding, and a voice started booming in their head: well, that's just nuts.…

Teacher: What I wish everyone knew about working in some high-needs schools via Valerie Strauss

Teacher: What I wish everyone knew about working in some high-needs schools

Sir Ken Robinson: Creativity Is In Everything, Especially Teaching

Sir Ken Robinson: Creativity Is In Everything, Especially Teaching… Does Common Core Ask Too Much of Kindergarten Readers? by Katrina Schwartz

Groupthink Does NOT Lead to Meaningful, Sustainable Solutions

Groupthink can be a powerful destructive force. Easily misunderstood as the values that sustain the organization, groupthink is more tied to the "view of the predominant group" and is "characterized by self-deception, forced manufacture of consent." In this time of stress as standards and testing are being challenged, evaluation methods are questioned, schools are confronting failure to prepare every student for their future, and financial…


The Importance of Good Principals 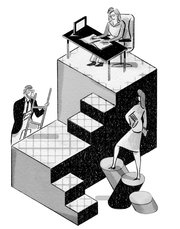 While certain public-school teachers might want to avoid the challenges of educating undocumented students, California teacher Andrew Simmons does not. Simmons writes in The Atlantic that good educators teach whatever kids show up -- regardless of behavior, academic skills, or language proficiencies, and whether they're in the country legally or not. Simmons views undocumented students as assets to his classroom and school…

Recently, pressure has mounted to decrease, if not eliminate, suspensions in public schools, writes New York City teacher Ruben Brosbe in BRIGHT. The correlation between suspensions, dropouts, and incarcerations -- particularly for black and Latino youth -- has been deemed a school-to-prison pipeline. Restorative justice has gained favor as a corrective to the zero-tolerance policies of the 1990s. Within a restorative…